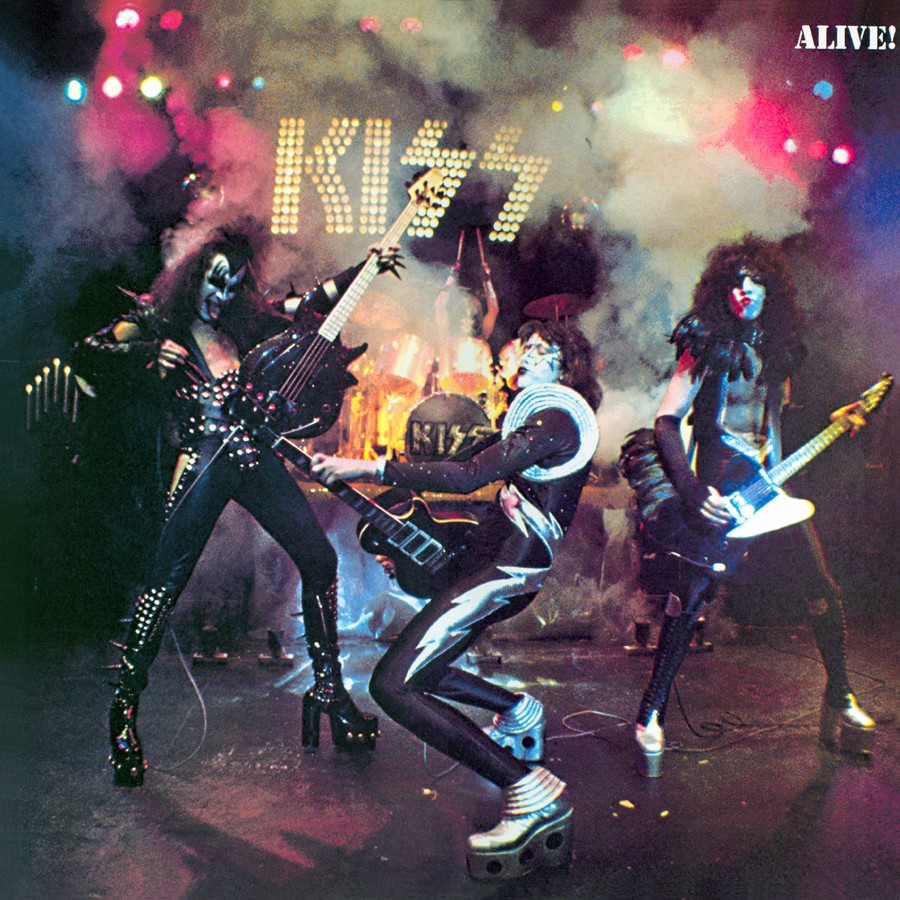 Alive! is KISS' fourth album and is considered their breakthrough, as well as a landmark for live albums. Released on September 10, 1975, the double-disc set contains live versions of selected tracks from their first three studio albums, Kiss (album), Hotter Than Hell, and Dressed to Kill.

"Alive! is a five.Alot of guitarists come up to me and tell me Alive! is their rock n roll bible. Thats how they learnt to play guitar. I thought I played better live because the audience inspired me. Some of it was re-recorded. I dont really remember to what extent but some of the stuff had to be fixed".

"When we started out, we always had the attitude even when we were third or fourth on the bill, that we were the headliners and it was our gig. We were out to blow everyone off the stage. But now that were on top, we dont feel any pressure that young bands will come along and try and outdo us".

"Thats when we started maiking money. I remember when we put out the live album it was basically something to put out until we did another studio album. We had no idea it was going to be as successful as it was".

Despite Kiss' reputation as a live act, which emphasized theatrics (such as explosions, smoking guitar solos, fire breathing, and blood spitting), as much as it did the music, their notoriety did not translate to increased record sales. Kiss was essentially surviving on then-manager Bill Aucoin's American Express card. Complicating matters was the fact that their label, Neil Bogart's Casablanca Records, was having financial difficulties of its own stemming from a major misstep: the label had released a double album of Johnny Carson monologues earlier in the year. However, the album was a flop, and Casablanca Records had pressed millions of copies in anticipation. The band and Aucoin were nevertheless able to convince Bogart that a memento of a Kiss show would boost their album sales.

Years later, both guitarist Paul Stanley and bassist Gene Simmons recounted that in the weeks after the release, they saw a significant increase in concert attendance. In the documentary Kiss: X-treme Close Up, Stanley remembers that at one particular show in Dayton, Ohio, "the place was packed; I mean you couldn't have gotten another person in with a shoehorn."

There has been considerable debate as to how much use was made of studio overdubs. Gene Simmons states in his autobiography Kiss and Make-Up that very little corrective work was done in the studio and that most of the studio time was devoted strictly to mixing down the multi-track recordings. He also emphasized that Kiss could not have done extensive overdubbing even if they had wanted to; thanks in no small part to the Johnny Carson album fiasco, the extremely meager budget allotted to the band simply would not allow it.

According to Dale Sherman's book Black Diamond and Goldmine magazine, in the early 1990s, Eddie Kramer stated there were a few overdubs to correct the most obvious mistakes: strings breaking or off-key notes, for instance. However, in recent years, Kramer has stated that the only original live recording on the album is Ace Frehley's guitar. In a recent televised interview, he also stated the only original live recording on the album is Peter Criss' drums.(So which is it - 'only' Ace or 'only' Peter?) --> In addition, on the recent VH1 special of the story of Kiss, the band members themselves make it more known that the album was severely doctored in the studio, and various musicians comment on the album in this special, revealing how disappointed they were to find out their heroes doctored the supposed "live" album in the studio.

Paul Stanley has noted that there's a bass mistake in the choruses of "C'mon and Love Me." He's also made comments that even though there have been live albums recorded later that make Alive! sound like it was recorded in a washroom, he has no qualms about it.

Alive! was first issued as a 2CD set in what has now become known as a 'fatboy' 2CD case. When the Kiss back-catalogue was remastered it was housed in a slimline 2CD case and, in keeping with the rest of the reissue programme, had the artwork restored.

Most recently, Alive! was re-released in 2006 as part of the Kiss Alive! 1975–2000 box set (also featuring Alive II, Alive III and Alive! The Millennium Concert). The short running-time of Alive! allowed for a single, unedited CD edition in this latest release. This remastered CD edition eliminates the breaks between the four sides of the original LP release, resulting in this version of the album playing as one continuous performance. The 72-Page booklet that comes with the CD set erroneously credits songwriting for "Cold Gin" to Paul Stanley instead of Ace Frehley. 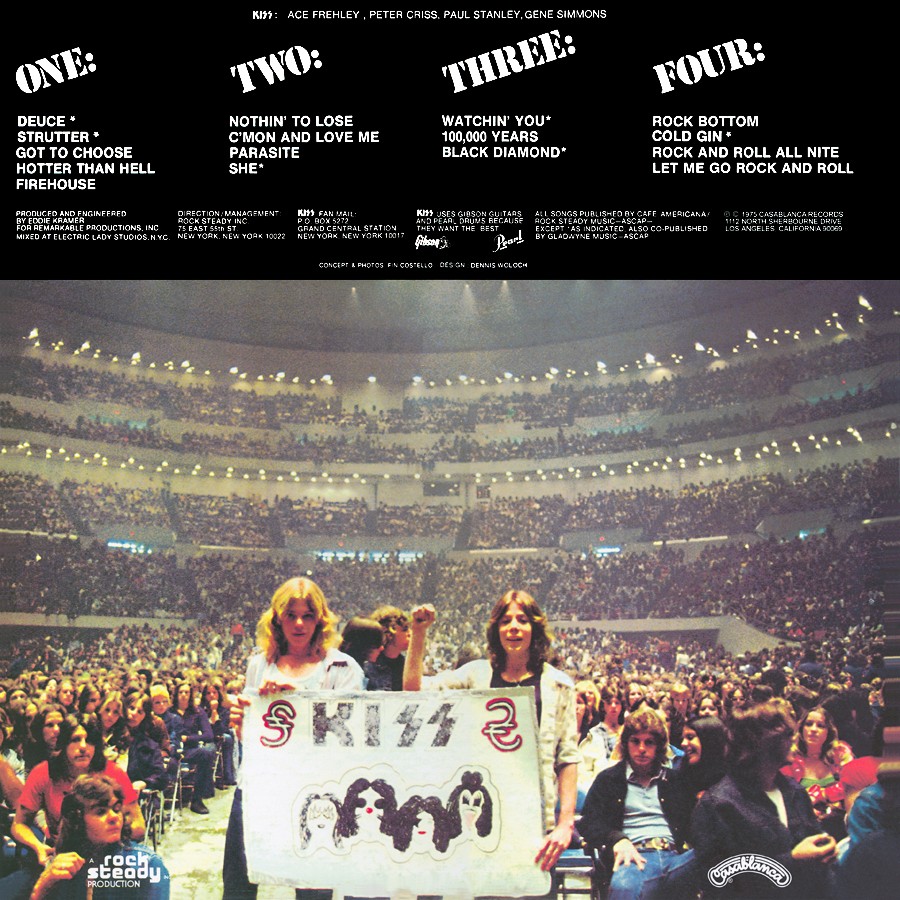 RIAA: Gold (album purported to be 4X Platinum, but uncertified at that level)