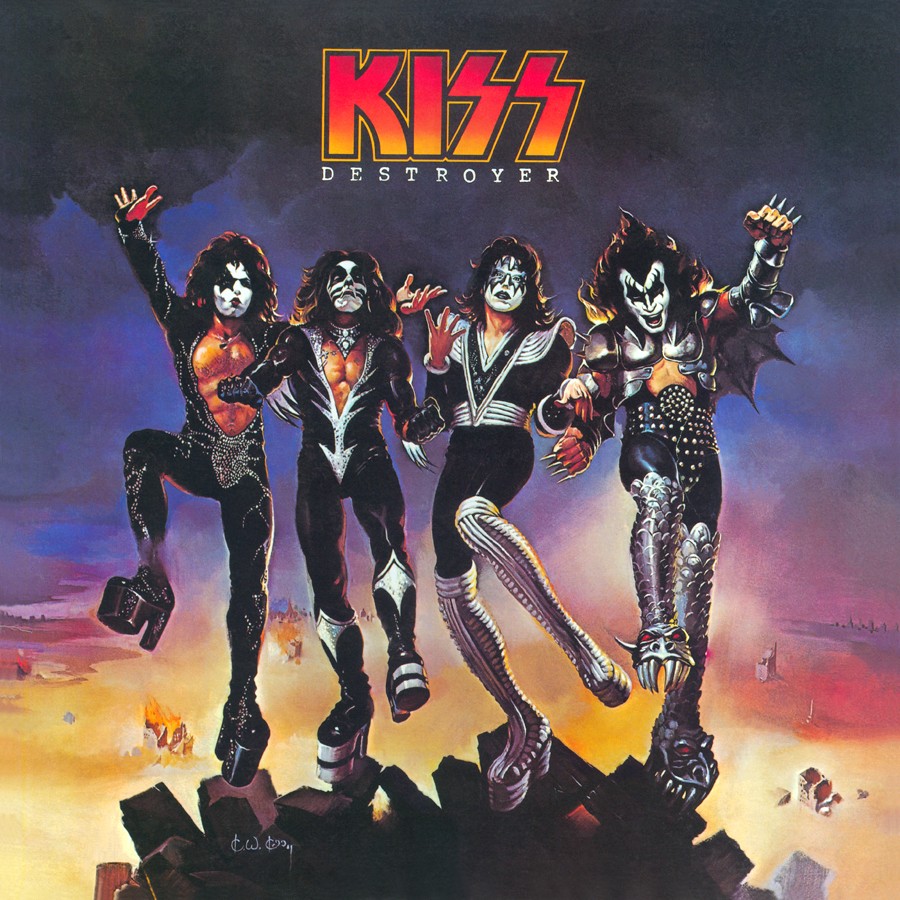 Destroyer is the fourth studio album and fifth album overall by hard rock band Kiss, released on March 15, 1976 in the United States. It was the second consecutive Kiss album to reach the Top 20 in the United States, as well as the first to chart in Germany and New Zealand. The album was certified gold by the RIAA on April 22, 1976. It was certified platinum on November 11, 1976, the first Kiss album to achieve that distinction.

Coming on the heels of the group's breakthrough album Alive!, Destroyer is easily the most ambitious studio recording of Kiss's '70s catalogue. Bob Ezrin, who had previously worked with Alice Cooper, was brought in to produce the album. Among the production flourishes Ezrin introduced to Kiss were sound effects, strings, screaming children and reversed drums (on "God of Thunder") as well as a children's choir.

Destroyer is the first Kiss album to prominently feature outside musicians, such as members of the New York Philharmonic-Symphony Orchestra. However, one musician was not credited: Dick Wagner, from Alice Cooper's band, replaced Ace Frehley on tracks such as "Sweet Pain" (as Frehley didn't want to interrupt a card game he was playing during recording sessions for the song) and even on a song that Frehley himself co-wrote, "Flaming Youth". Wagner also played the acoustic guitar found on the song "Beth". The success of Alive! and Destroyer enabled the band to embark on their first tour of Europe.

Throughout the years, "Detroit Rock City", "God of Thunder", "Shout It Out Loud", "King of the Night Time World", and "Do You Love Me?" have become permanent staples on the band's concerts. "Beth" was last played live on the band's Dec. 20, 2003 concert at Save Mart Center in Fresno, CA the last show of the World Domination Tour; after drummer Peter Criss' final departure, the band permanently retired the song from their set list.

In 2003, the album was ranked number 496 on Rolling Stone magazine's list of the 500 greatest albums of all time.

"I think its a great record. The actual finished product was very innovative and it showed growth for us. He made us look at things in a different light".

After attaining modest commercial success with their first three studio albums, Kiss achieved a commercial breakthrough with the 1975 concert album Alive! It was the first album by the band to be certified gold, and eventually went multi-platinum. The success of Alive!, which spent 110 weeks on the charts, benefited not only the struggling band but their cash-strapped label, Casablanca Records. Kiss signed a new contract with Casablanca in late 1975, partly because the label had been very supportive from the start of the band's career. The contract was only for two albums, however, an indication that Casablanca was unsure if the group could duplicate the accomplishments of Alive!

Rehearsals for Destroyer began in August 1975, while the group was embarked on their supporting tour for Alive! Bob Ezrin, who had produced a string of successful albums for Alice Cooper, was chosen to work with Kiss. The band felt that Ezrin was the right person to help them take their sound to the next level and to maintain the commercial success they had achieved with Alive!

The first demo recorded during the Destroyer sessions was "Ain't None of Your Business," featuring Peter Criss on vocals. The plodding, heavy song, written by country songwriters Becky Hobbs and Lew Anderson, was rejected by the band and later appeared on the 1977 debut album by Michael Des Barres' band Detective. Although this song was rejected other outside songs and suggestions were accepted by the band. In particular, Kim Fowley and Mark Anthony became important contributors during the songwriting process.

During the recording sessions Ezrin resorted to numerous tactics designed to increase the quality of music Kiss recorded. Because none of the group were trained musicians, Ezrin halted the sessions at one point to provide lessons in basic music theory. In an effort to instill a sense of discipline, he wore a whistle around his neck and exhorted the band with sayings such as, "C'mon campers, let's get going!" When Simmons stopped playing early during the recording of an outro Ezrin yelled at him, saying, "Don't you ever stop a take unless I tell you!"

Paul Stanley later compared the experience of working with Ezrin as "musical boot camp" but said that the group "came out a lot smarter for it." Simmons echoed the sentiment by stating, "It was exactly what we needed at the time." Lead guitarist Ace Frehley, who did not approach the recording process with the discipline Ezrin wanted, often found himself at odds with the producer. He bristled at being asked to perform multiple takes of his solos, and became uncooperative. As a result Ezrin brought in session guitarist Dick Wagner, Ezrin threatened to replace Ace with him and Ace cooperated.

The cover art for Destroyer was painted by fantasy artist Ken Kelly. Prior to the album's release Kelly's work was brought to the attention of Gene Simmons, who met with Kelly to discuss ideas for Destroyer. Kelly agreed but asked to see Kiss perform live first to gain inspiration. He was invited to a show and given a backstage pass. He later said of the performance, "It blew me away." Kelly was later commissioned by the band to draw the cover for 1977's Love Gun.

Kelly's original version of the album cover was rejected by the record company because they felt the scene was too violent looking with the rubble and flames. Also, the original version had the members of KISS wearing the Alive Costumes.

The front cover shows the group striding on top of a pile of rubble, and a desolate background spotted with destroyed buildings, some of which are engulfed in flames. The back cover shows a similar scene, but with more buildings on fire. The front of the LP-liner features a large Kiss logo and the lyrics to "Detroit Rock City." The other side displays the lyric "SHOUT IT OUT LOUD", as well as an advertisement for the Kiss Army fan club.

Destroyer sold well upon its release on March 15, 1976 and was certified gold on April 22. Although exact sales figures are not known, Paul Stanley stated that the album initially sold 850,000 copies in the U.S., well in excess of any of Kiss's first three studio albums. After peaking at #11 on the Billboard album chart on May 15, however, Destroyer quickly fell and by August was at #192. The first three singles — "Shout It Out Loud," "Flaming Youth," and "Detroit Rock City" — failed to ignite sales any further, leading the band and its management to view the album as a failure relative to Alive! The band and Ezrin cited fan backlash as the reason Destroyer did not meet sales expectations. Ezrin also stated that the "grassroots rock press" was particularly critical of the album. Rolling Stone referred to "bloated ballads," "pedestrian drumming," and "lackluster performances" in its review.

It was not until radio stations started playing the B-side of the "Detroit Rock City" single, "Beth," that the album started to sell as expected. The ballad, which according to Simmons was deliberately put on the B-side to force stations to play "Detroit Rock City," started receiving numerous listener requests and became an unexpected hit. "Beth" was re-released as the fourth single in late August, and it peaked at #7 on the Billboard singles chart on September 25. It was the group's first Top 10 song and re-ignited sales of the album. On November 11 Destroyer became the first Kiss album to be certified platinum.

David and Josh Ezrin – voices on "God of Thunder"