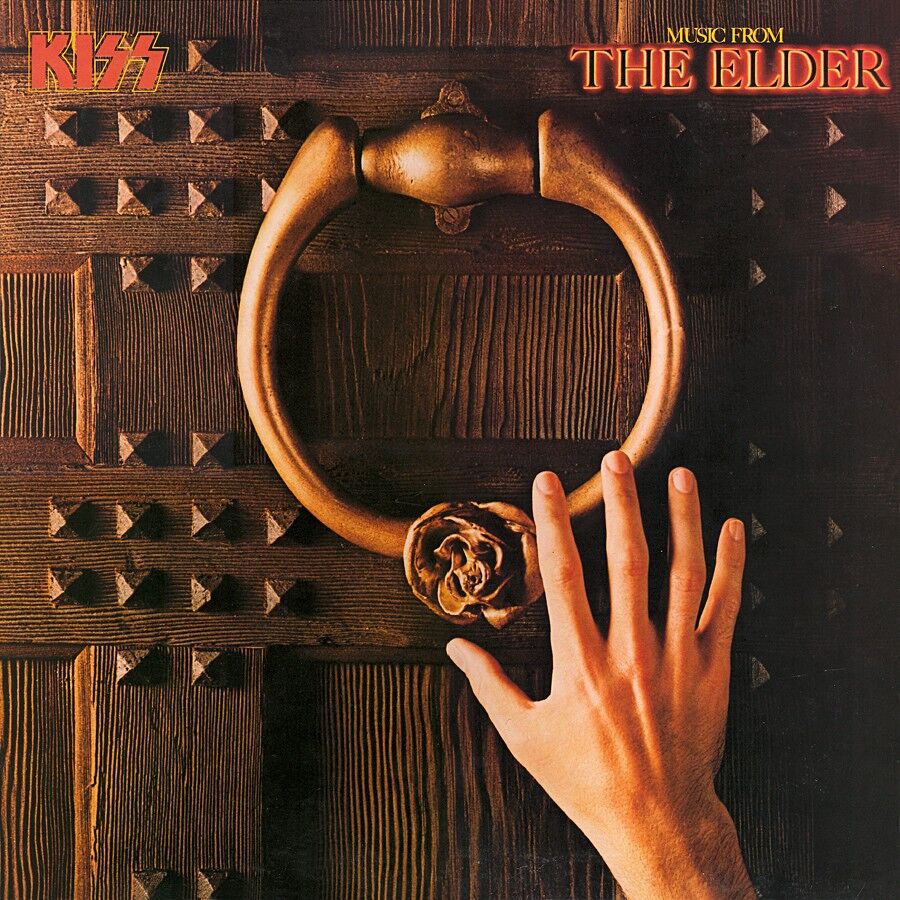 Music from "The Elder" is a 1981 concept album released by the American hard rock band Kiss. It was an attempt on the part of the group to establish Kiss as credible artists, and also to reverse the trend of declining album sales and commercial popularity that had begun in 1979. Instead, the album further served to alienate the group's fan base and represents the commercial nadir of the group.

To date, Music from "The Elder" is one of only two Kiss studio albums to fail to earn any US certification (the other is 1997's Carnival of Souls: The Final Sessions). Album sales were so poor that Kiss did not embark on a supporting tour for the first time in its eight-year history, opting instead to make a handful of promotional appearances.

Music from "The Elder" was the last Kiss album that lead guitarist Ace Frehley participated in until the 1996 reunion. Frehley, who was frustrated with the band's creative direction, as well as with the production of Bob Ezrin, stopped actively participating in Kiss by early 1982 and was officially out of the group by November 1982.

While "A World Without Heroes" was later on performed on the band's 1995 MTV Unplugged appearance, the entire album has been largely ignored on live performances. During a show in Australia in 2004, the band attempted to perform "I", but bassist/vocalist Gene Simmons had long forgotten the lyrics.

In His Own Words[edit | edit source]

"Two stars. It would have been better if they hadnt cut out some of my solos. In retrospect, the band were getting further and further apart. Out goes Peter and in comes Eric Carr and they had brought in Ezrin, who I didnt think was right at this point in our career. My gut feeling at this point in our career it was time todo a really heavy metal record to get back to basics and Paul and Gene didnt agree with me. They wanted todo a concept album with Ezrin and I was against the whole project. But I was outvoted. Here I am in one of the biggest groups in the world and I feel like my balls have been cut off because they could negate any of my votes because it was two to one. Without Peter there to balance it off, Paul and Gene could run the group.When I realized that, I became really unhappy with the whole situation and I started abusing drugseven more than alcohol because I was really frusterated. I was a Catch-22 situation. I have the original solos that were cut. Id say 40 to 50 percent of the guitar solos and overdubs that I did were never used by Bob Ezrin. To this day I really dont understand why".

"I think its a good record. There was a problem between myself and Paul,Gene and Bob Ezrin because alot of the time I was recording in my home studio in Connecticut and they were recording up in Canada and some things got lost in translation".

"I dont think The Elder was a bad record. I just dont think it sounded like a KISS record.The last time I listened to it I got a speeding ticket (laughs). So I took the tape and threw it out my window and said "this album is a bad-luck albu for me all the way around!".

Kiss was in the midst of a transitional phase as the 1980s began. Founding member and drummer Peter Criss, who was not involved in the recording of 1980's Unmasked, officially left Kiss in May 1980. His replacement, Eric Carr, was officially introduced in July. The group had recently embarked on a hugely successful tour of Australia and New Zealand (where the group's popularity was at its peak) in November, but the band's commercial fortunes at home were drastically reduced from their 1975-79 heyday. Due to the lackluster sales of Unmasked, Kiss toured exclusively outside the United States for the first time in their career, save for one concert at the now-defunct Palladium Theatre in New York. The overseas tours were well-attended, partly because Kiss had rarely ventured abroad and because the more pop oriented Dynasty and Unmasked albums did better in the European markets than their earlier more hard rock albums had.

This commercial downturn is attributable to many factors, two of the biggest being the softening of Kiss's image in an effort to appeal to a broader fan base, and the softening of their music. Unmasked was a decidedly more pop-oriented effort than earlier albums, and represented a sales dropoff of 65% from 1979's Dynasty. It also became the first Kiss album to fail to achieve platinum status since 1975's Dressed to Kill. From a marketing standpoint, the glut of Kiss merchandising that had cropped up in the late 1970s had led to a backlash from fans, who felt that Kiss was now more concerned with making money than with making music.

In an effort to return to their hard rock roots, Kiss began recording music that was more akin to the hard rock style that had launched them to popularity in the mid-1970s. The Fall 1980 issue of the Kiss Army Newsletter hinted at the style the new album was to take—"It will be hard and heavy from start to finish—straight-on rock and roll that will knock your socks off." But at the same time, founding members Gene Simmons and Paul Stanley, and creative manager Bill Aucoin felt that just returning to a harder sound was not enough. They believed that only a bold artistic statement would regenerate public interest in Kiss. To that end, they enlisted producer Bob Ezrin to work with the group who in turn daringly employed members from the American Symphony Orchestra and St. Robert's Choir to record tracks for the album. Ezrin had worked with the group before, producing the group's hit 1976 album Destroyer. More recently, he had co-produced Pink Floyd's landmark 1979 concept album, The Wall. Simmons, Stanley and Aucoin felt that Ezrin could help bring their ambitions to fruition.

Recording sessions for the album commenced in March 1981. Sessions were held in Toronto, New York City, and guitarist Ace Frehley's home studio in Wilton, Connecticut. During the recording, Ezrin and Kiss worked in complete secrecy. Ezrin, in particular, had insisted that he would only communicate with Kiss or Bill Aucoin. No one other than Ezrin and Kiss ever heard the album in progress.

Frehley became increasingly disgruntled during the sessions, as he disagreed with the band's decision to abandon their original plan to record a straight-ahead rock album. Additionally, a number of guitar solos Frehley recorded were not included on the final cut. But, as happened frequently after Criss's departure, Frehley was outvoted 2-to-1 on band decisions of this type. (Carr was not a partner in Kiss as the other three members were, but rather an employee). He also resented what he felt was Simmons' and Stanley's domination of the recording sessions.

When Kiss premiered Music from "The Elder" for their management and record company in October 1981, the reaction was a mixture of confusion and resentment. Business manager Howard Marks refused to allow his company's name to appear in the liner notes. Fan reaction to the album was equally harsh, while critical reaction was comparably positive. But while reviews like the one printed by Rolling Stone were much kinder than past ones had been, the album quickly disappeared from the charts. After being released on November 10, it peaked at #75 and was off the charts completely by February 1982.

Although budgets were prepared for a tour, none was ever undertaken. The only public appearances the band made in conjunction with the album were a January 15, 1982 appearance on the late-night comedy show "Fridays" (they performed "A World Without Heroes", "I" and "The Oath"), Solid Gold (they performed "A World Without Heroes", and "I"), and a January 28 lip synched performance of "I" from Studio 54 that was broadcast via satellite to the Sanremo Festival in Italy. Frehley was a no show for the Studio 54 appearance, so the group performed as a trio.

Most of the participants in the album's recording admit that it was a major misstep for Kiss. Ezrin, despite what was his recent success with the even more ambitious The Wall, admitted that his judgments concerning Music from "The Elder" were clouded due in large part to a cocaine addiction at the time. Stanley and Simmons admit that they were "delusional" concerning the project, while Frehley has stated that he felt that it wasn't a good idea to begin with.

Q Magazine ranked Music From "The Elder" 44th in their list of The 50 Worst Albums Ever.[7]

The original vinyl release was a gatefold-sleeve. For the first time, a Kiss album featured no image of the group, let alone the customary front-cover appearance. Contrary to popular belief, the hand reaching for the door-knocker is not that of Paul Stanley: Bill Aucoin has stated that it belongs to a hand-model, hired specifically for the shoot. The door itself belongs to a Methodist church on Park Avenue, New York City. One of the rarest releases by Kiss on vinyl was an alternate cover of the Elder released in Turkey on Dallas Records which used the "A World Without Heroes" single art on the cover.

The photo session displayed a change of image: the costumes were more streamlined, especially when compared with the somewhat overblown (even for Kiss) costumes for Unmasked, as were the hairstyles of Stanley and Simmons in particular.

The basic plot of Music from "The Elder" involves the recruitment and training of a young hero (The Boy) by the Council of Elders who belong to the Order of the Rose, a mysterious group dedicated to combating evil. The Boy is guided by an elderly caretaker named Morpheus. The album's lyrics describe the boy's feelings during his journey and training, as he overcomes his early doubts to become confident and self-assured. The only spoken dialogue is at the end of the last track, "I." During the passage, Morpheus proclaims to the Elders that The Boy is ready to undertake his odyssey. 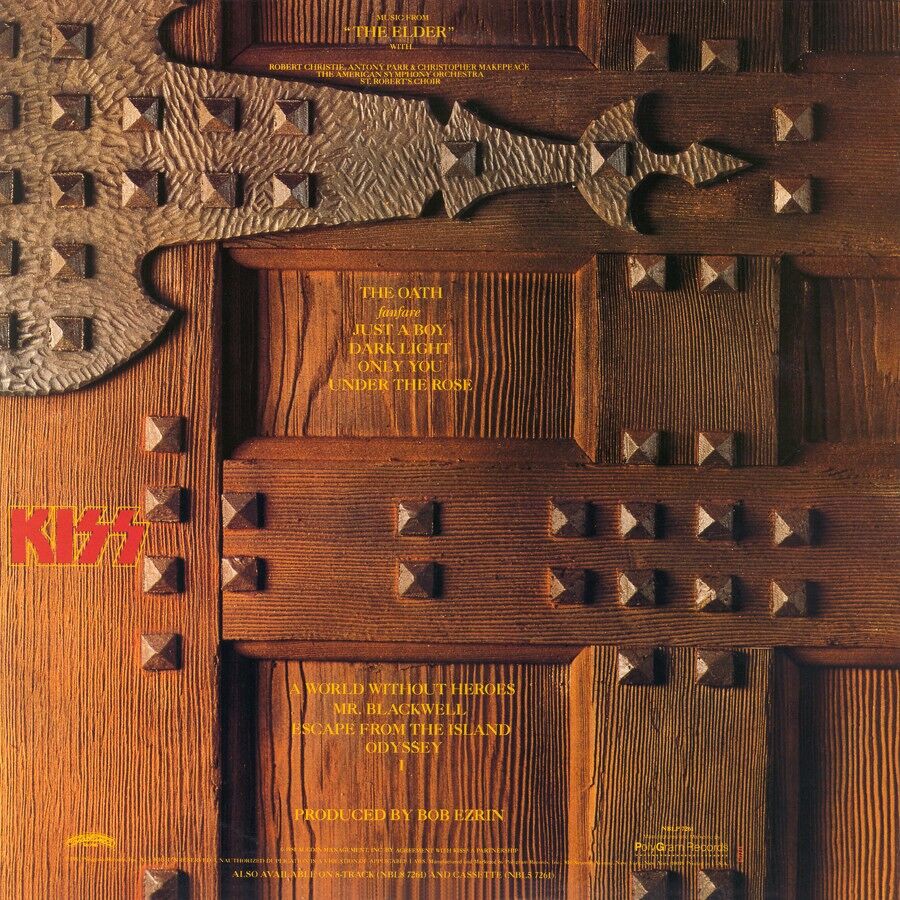 A World Without Heroes (2:40) - Stanley/Ezrin/Reed/Simmons

Escape From The Island (2:50) - Frehley/Ezrin/Carr

Bob Ezrin - producer; keyboards; bass guitar on "The Oath" and "Escape from the Island"

Allan Schwartzberg - drums on "Odyssey" and "I" 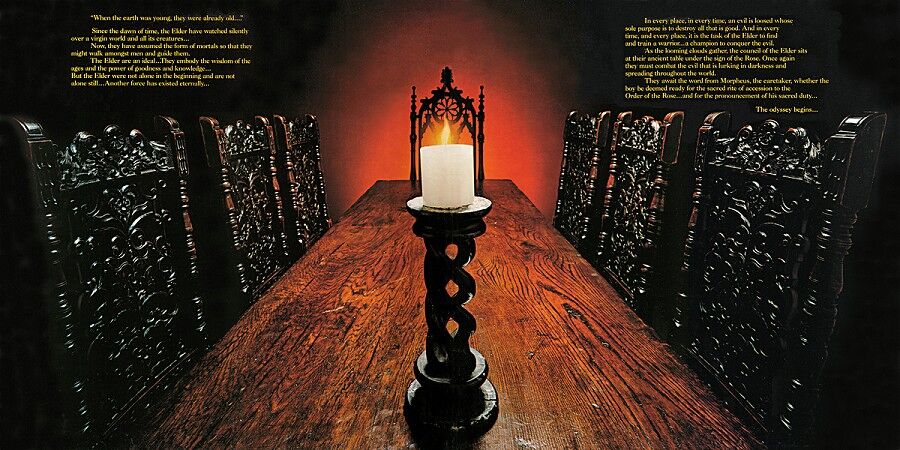 Retrieved from "https://acefrehley.fandom.com/wiki/Music_From_%22The_Elder%22?oldid=3913"
Community content is available under CC-BY-SA unless otherwise noted.